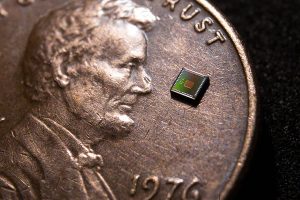 Electrical engineers at the University of California San Diego have developed a temperature sensor that runs on only 113 picowatts of power — 628 times lower power than the state of the art and about 10 billion times smaller than a watt. This “near-zero-power” temperature sensor could extend the battery life of wearable or implantable devices that monitor body temperature, smart home monitoring systems, Internet of Things devices and environmental monitoring systems.

The technology could also enable a new class of devices that can be powered by harvesting energy from low-power sources, such as the body or the surrounding environment, researchers said. The work was published in Scientific Reports on June 30.

“Our vision is to make wearable devices that are so unobtrusive, so invisible that users are virtually unaware that they’re wearing their wearables, making them ‘unawearables.’ Our new near-zero-power technology could one day eliminate the need to ever change or recharge a battery,” said Patrick Mercier, an electrical engineering professor at UC San Diego Jacobs School of Engineering and the study’s senior author.

Read the rest of the press article describing this technology HERE, or view the publication directly on the Nature website.