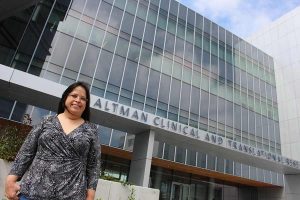 Angela Valdez was one of the first people to enroll in the SENSOR Study in hopes to one day find an alternative to finger pricking to monitor her diabetes.

A needleless glucose monitor, which measures insulin levels through sweat on the skin, has been developed by UC San Diego Jacobs School of Engineering researchers led by Joseph Wang and Patrick Mercier. The device is being used in a phase I clinical trial headed by Dr. Edward Chao, in collaboration with Wang and Mercier. The SENSOR Study (Studying the Effectiveness of Non-Invasive Glucose Sensors in Patients with Diabetes) takes places at UC San Diego Altman Clinical and Translational Research Institute, where the team tests the tattoo sensor’s accuracy at detecting glucose levels compared to a traditional glucometer.

“Just like a kid’s temporary tattoo, you apply it on the arm, dab with water and remove the back paper,” said Mercier, an assistant professor in the Department of Electrical and Computer Engineering. “Our tattoo, however, is printed with material containing two electrodes that apply a small amount of electrical current. This forces glucose molecules that reside below the skin to rise to the surface, allowing us to measure blood sugar. It’s safe and you can’t really feel it.”

Participants wear a sensor during fasting, at various times up to a couple of hours after eating. To validate accuracy, glucose levels from the sensor will be compared to results from simultaneous finger stick glucose readings.

Read more about the clinical trial, along with preliminary feedback from early participants HERE.