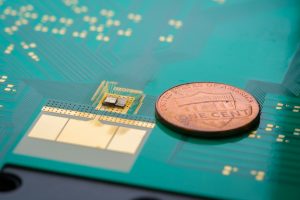 A new power saving chip developed by engineers at the University of California San Diego could significantly reduce or eliminate the need to replace batteries in Internet of Things (IoT) devices and wearables. The so-called wake-up receiver wakes up a device only when it needs to communicate and perform its function. It allows the device to stay dormant the rest of the time and reduce power use.

The technology is useful for applications that do not always need to be transmitting data, like IoT devices that let consumers instantly order household items they are about to run out of, or wearable health monitors that take readings a handful of times a day.

“The problem now is that these devices do not know exactly when to synchronize with the network, so they periodically wake up to do this even when there’s nothing to communicate. This ends up costing a lot of power,” said Patrick Mercier, a professor of electrical and computer engineering at UC San Diego. “By adding a wake-up receiver, we could improve the battery life of small IoT devices from months to years.”

The team, led by Mercier and UC San Diego electrical and computer engineering professors Drew Hall and Gabriel Rebeiz, published their work titled, “A 22.3 nW, 4.55 cm2 Temperature-Robust Wake-up Receiver Achieving a Sensitivity of -69.5 dBm at 9 GHz,” in the IEEE Journal of Solid-State Circuits.

Read more about the press article written about this work here.