Congrats to Loai Salem and John Louie, who have a paper entitled “A Flying-Domain DC-DC Converter Powering a Cortex-M0 Processor with 90.8% Efficiency” accepted for publication at the 2016 edition of the International Solid-State Circuits Conference!  More details about this completely new type of DC-DC converter will be available after the conference in February 2016.

San Diego, Calif., October 13, 2015 — A wireless charger that’s compatible with different consumer electronics from different brands is one step closer to becoming a reality thanks to research by electrical engineers at the University of California, San Diego.

Researchers have developed a dual frequency wireless charging platform that could be used to charge multiple devices, such as smartphones, smartwatches, laptops and tablets, at the same time — regardless of which wireless standard, or frequency, each device supports.

“To our knowledge, this is the only multi-standard wireless power transmitter that’s been shown to operate simultaneously at two different frequencies with high efficiency,” said Patrick Mercier, a professor in the Department of Electrical and Computer Engineering at UC San Diego who led the study published in the journal IEEE Transactions on Power Electronics.

The new proof of concept study not only presents a “universal wireless charger” that can deliver power to multiple devices concurrently, it addresses an issue that afflicts existing wireless technology: incompatibility between the three competing wireless standards in today’s market (known as Qi, Powermat and Rezence). Each wireless charger so far supports either the Qi, Powermat, or Rezence standard and will only work with devices that support the same standard.

As a result, wireless charging technology is ripe for a battle similar to the one that took place between Blu-ray and HD DVD. A battle between incompatible wireless standards could cripple the field until a winner emerges.

“To help avoid such a situation, we developed a wireless technology that is universal and supports all of these standards so it won’t matter which standard your device supports,” said Mercier, who is affiliated with the Center for Wireless Communications and is the co-director of the Center for Wearable Sensors, both at UC San Diego.

To address this problem, Mercier and his team built a charging platform capable of simultaneously operating across the frequencies supported by all three wireless power standards. The prototype that they built is a thin, rectangular box (12.5 centimeters × 8.9 centimeters) that contains two transmitter coils: an inner coil optimized to operate at a frequency of 200 kHz, and an outer coil optimized to operate at 6.78 MHz. One of the features of this design is that the coils lie in the same plane, allowing for a compact size. The platform is just big enough to fit two smartphones side by side. Another important feature of the prototype is a filtering circuit that the researchers designed to prevent the coils from interacting with each other and causing efficiency losses.

Patrick Mercier is the first professor in the Department of Electrical and Computer Engineering at the University of California, San Diego to receive a Beckman Young Investigator (BYI) Award from the Arnold and Mabel Beckman Foundation. Mercier, the co-director of the UC San Diego Center for Wearable Sensors, is one of eight researchers honored with the award in 2015.

“Arnold Beckman was a remarkable inventor who was instrumental in building technologies for advanced medical diagnostics,” said Mercier. “He is someone who brought together good engineering practices and scientific research to help humanity. This is something I aspire to accomplish with my research.”

The BYI program, one of four award programs spearheaded by the Arnold and Mabel Beckman Foundation, provides research grants to promising young faculty and aims to “foster the invention of methods, instruments and materials that will open up new avenues of research in science.”

The BYI program funds projects over four years with grants in the range of $750,000. Mercier is the first UC San Diego professor to win this award since 2008. 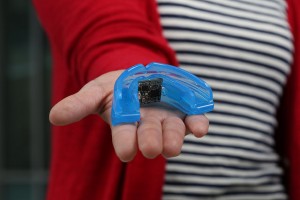 Engineers at the University of California, San Diego, have developed a mouth guard that can monitor health markers, such as lactate, cortisol and uric acid, in saliva and transmit the information wirelessly to a smart phone, laptop or tablet.  Read more about this work here.  This work has been featured in numerous press articles, including: 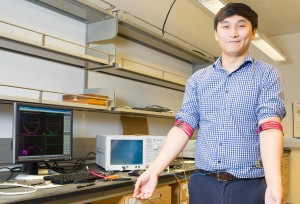 Electrical engineers at the University of California, San Diego demonstrated a new wireless communication technique that works by sending magnetic signals through the human body.  Read more about this work here.

This work was also featured in dozens of press publications, including the following: 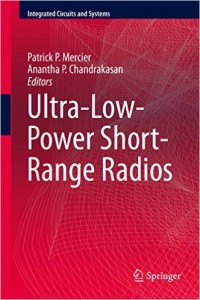 Patrick Mercier and Anantha Chandrakasan have published a new book exploring the design of ultra-low-power radio-frequency integrated circuits (RFICs) that operate over distances ranging from a few centimeters to a few meters. The book features contributions from leading universities (UCSD, MIT, UW, Michigan, Georgia Tech, and more) and companies (Qualcomm, Texas Instruments, and more) that describe bleeding-edge techniques to achieve ultra-low-power communication over short-range links. Many different applications are covered, ranging from body-area networks to transcutaneous implant communications and smart-appliance sensor networks. Various design techniques are explained to facilitate each of these applications.

You can order a copy directly from Springer, Amazon, or any other fine book retailer.

We are currently looking for a post doctoral fellow to work in the EEMS lab on projects pertaining to ultra-low-power analog circuit design, mixed-signal circuits, biosensors, wearables, and/or implantable devices. The ideal applicant should have strong IC design and system-level design experience.  Interested applicants should contact Prof. Mercier directly with a CV, brief personal statement, and list of references.

Disclaimer: We receive many applications on a daily basis, and we will unfortunately not be able to respond to all inquiries.  The position will remain open until filled by a qualified candidate.

Similarly, congratulations to Jiwoong Park and Arnold Yeung (and collaborators), who will be presenting papers at the Engineering in Medicine and Biology Conference (EMBC) in Milan, Italty in August 2015 on a new Human Body Communications concept, and on detailed EEG electrode comparisons, respectively.

More information about all four papers will be available in mid-September.

Congratulations to Loai Salem, Sohmyung Ha, and Chul Kim, who will be presenting papers on a high-efficiency, large voltage range switched-capacitor power management integrated circuit (PMIC), an integrated adiabatic stimulator for neuromodulation applications, and an integrated resonant regulating rectifier for efficient reception and regulation of wireless power in fully-integrated biomedical implants.  Congratulations to all co-authors in the EEMS and Integrated Systems Neuroengineering labs who participated on the latter two papers.

Abstracts for each paper, along with the rest of the program, can be found here.  More details will become available at the conference in June 2015.

It wasn’t that long ago that you had to go to your doctor’s office to measure most of your vital signs.

But now, you can buy wearable devices that measure your blood pressure, or even record the electrical activity of your heart.

So what’s next? UC San Diego’s Center for Wearable Sensors offers a glimpse.

The Hellman fellowship is awarded to “young faculty in the core disciplines who show capacity for great distinction in their research and creative activities.”  Prof. Mercier plans to use this award to research and develop anatomically-miniaturized, energy-autonomous biomedical sensors and instrumentation electronics.

Congratulations to Professor Mercier who has won the Department of Electrical and Computer Engineering Graduate Teaching Award for the 2012/2013 academic year.  This award is based on high student reviews and executed performance in ECE 283 (now called ECE 203): Biomedical Integrated Circuits and Systems. 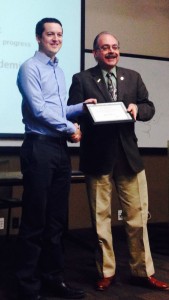 Congratulations to Loai Salem, who will be presenting a paper entitled “An 85%-Efficiency Fully Integrated 15-Ratio Recursive Switched-Capacitor DC-DC Converter with 0.1-to-2.2V Output Voltage Range” at the 2014 International Solid-State Circuits Conference (ISSCC) in San Francisco, California.  ISSCC is regarded as the premier conference in the area of solid-state circuits.

Congratulations also to Saurav Bandyopadhyay (now at Texas Instruments), along with collaborators at MIT, Harvard Medical School, and the Massachusetts Eye and Ear Infirmary, who will be presenting a paper entitled “A 1.1nW Energy Harvesting System with 544pW Quiescent Power for Next-Generation Implants”, also at ISSCC 2014.

The advanced program can be found here.  More details about the papers will be available after the conference in February 2014.

Researchers at UC San Diego, along with their industry counterparts, are working to make power amplifiers more energy efficient while at the same time capable of handling ever increasing amounts of data across the wireless spectrum.  Read an article about the conference here.

We are currently looking for up to two post doctoral fellows to work in the EEMS lab on projects pertaining to magnetic sensors and high-speed link design.  In both cases, the ideal applicant should have strong IC design and system-level design experience.  In both cases, interested applicants should contact Prof. Mercier directly with a CV, brief personal statement, and list of references.  An anticipated start date is January, 2014.

The ideal post-doc applicant should have high-precision analog IC design experience, and have a strong background in physics. Experience with lock-in amplifiers and PLLs is a plus.

The ideal post-doc applicant should have experience design high-speed ICs.  This project entails design of a differential communication link over 500m with a required bandwidth of 500Mbps.

Disclaimer: We receive many applications on a daily basis, and we will unfortunately not be able to respond to all inquiries.  Both positions will remain open until filled by a qualified candidate.

In the news: extracting energy from the biologic battery in the inner-ear 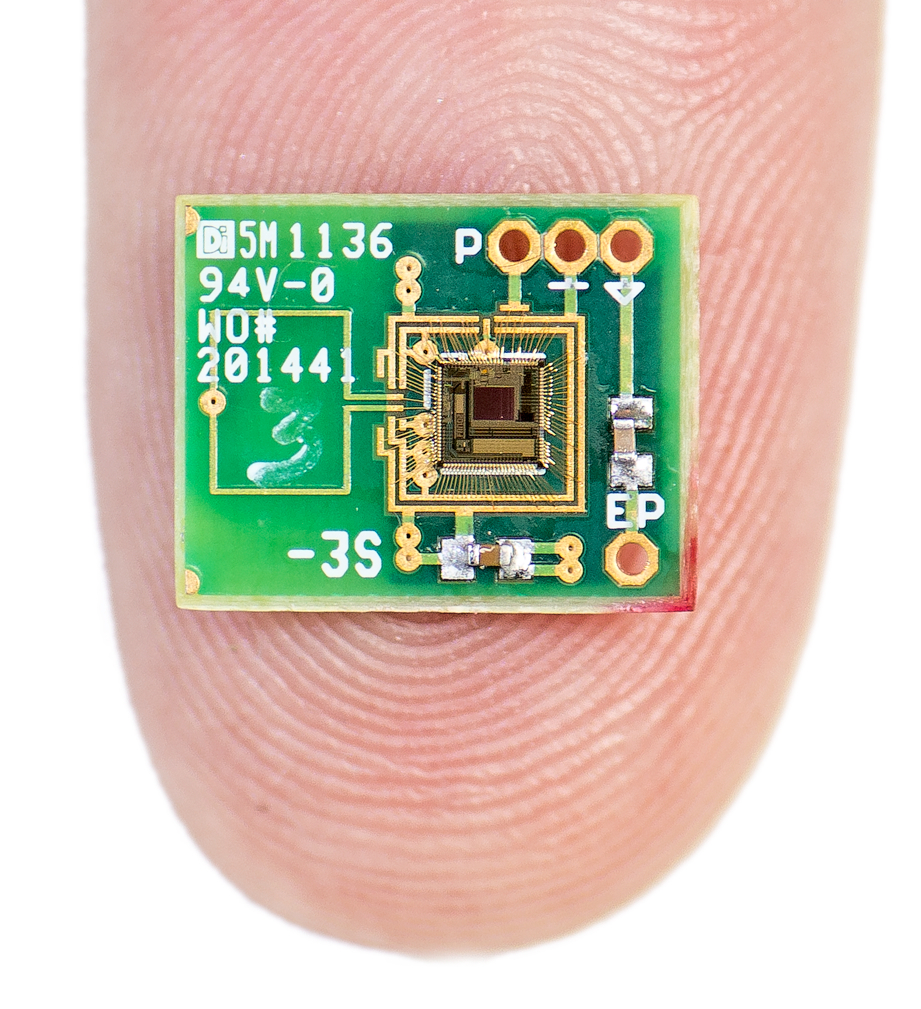 A group of researchers consisting of Patrick Mercier (principal investigator of the Energy-Efficient Microsystems Group), Andrew Lysaght, Saurav Bandyopadhyay, Anantha Chandrakasan, and Konstantina Stankovic have discovered how to extract power from the biologic battery that occurs naturally within the inner-ear of mammals.  The results, featured in the journal Nature Biotechnology this week, show for the first time that it is not only possible to extract energy from the ear, but that it is also possible to use this energy to power useful electronic devices – in this case a miniaturized radio transmitter and sensor.

One of the main engineering challanges of building such a bioelectronics and energy harvesting system is that the extractable power from the inner-ear is extremely small – on the order of a few nanowatts.  By employing innovative near-zero-leakage power electronics, the researchers were able to boost the voltage of the biologic battery from approximately 80 mV to 1 V, which was then used to operated a 2.4 GHz radio transmitter.  The resulting chip design, implemented in a 180nm CMOS technology, employed an extremely duty-cycled energy-buffering architecture, where the radio transmitted a single packet approximately once per minute.

More detailed information regarding chip implementation results, clinical experiments, and future directions can be found in the paper here.  Meanwhile, the results have generated interest in the press, featuring coverage by many news and social media organizations, including the journal Nature, IEEE Spectrum, Popular Science, the front page of MIT’s website, Discovery News, the Los Angeles Times, the Wall Street Journal, etc.  In particular, MIT News has a recommended article about the work, and can be found here. 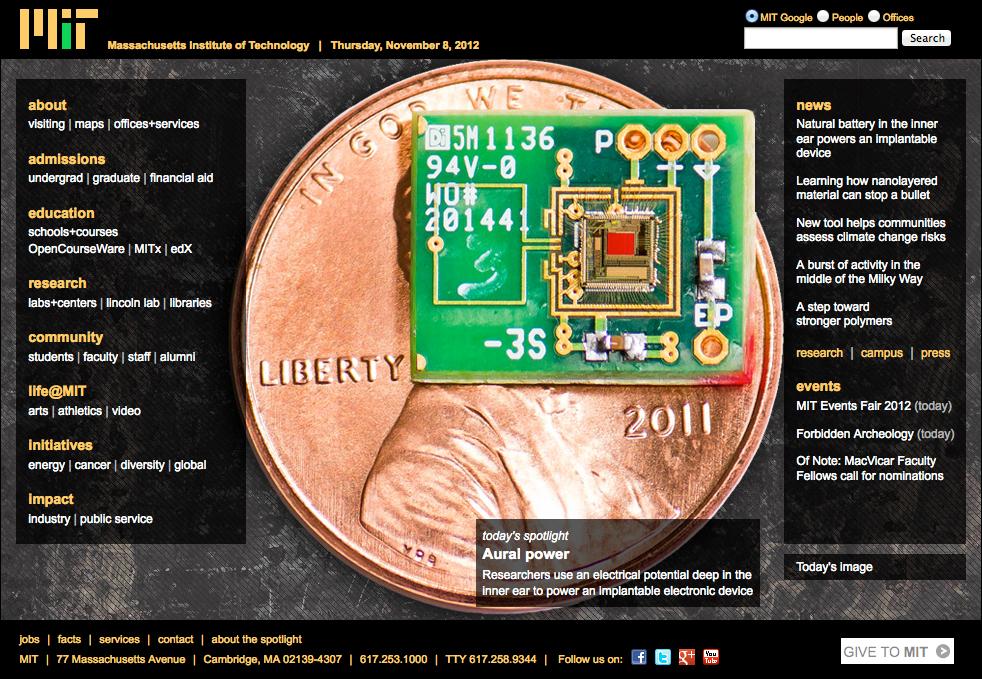 Work by Mercier and colleagues was highlighted in the journal Nature today.  More information can be found here:

The project was completed with cross-disciplinary collaboration between MIT, Harvard Medical School, and the Massachusetts Eye and Ear Infirmary.

Patrick Mercier joins the Department of Electrical and Computer Engineering at the University of California, San Diego as an Assistant Professor.  The ECE department is part of the Jacobs School of Engineering at UCSD. 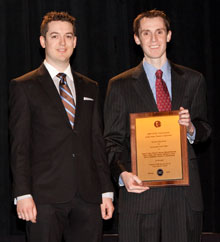 Denis Daly, Patrick Mercier, Anantha Chandrakasan and colleagues from MIT, the University of Washington, and the University of Arizona receive the Jack Kilby Award for Outstanding Student Paper at the International Solid-State Circuits Conference (ISSCC) 2010 (link to SSCS Magazine).  The work on cyborg insects and UWB radios was featured on Discovery News and IEEE Spectrum.  This work was also featured in a Technology Review article about Prof. Anantha Chandrakasan.